That’s the weigh to do it!

I realise I've never felt healthier and, strangely, rarely so happy... I decide in:spa is genius. 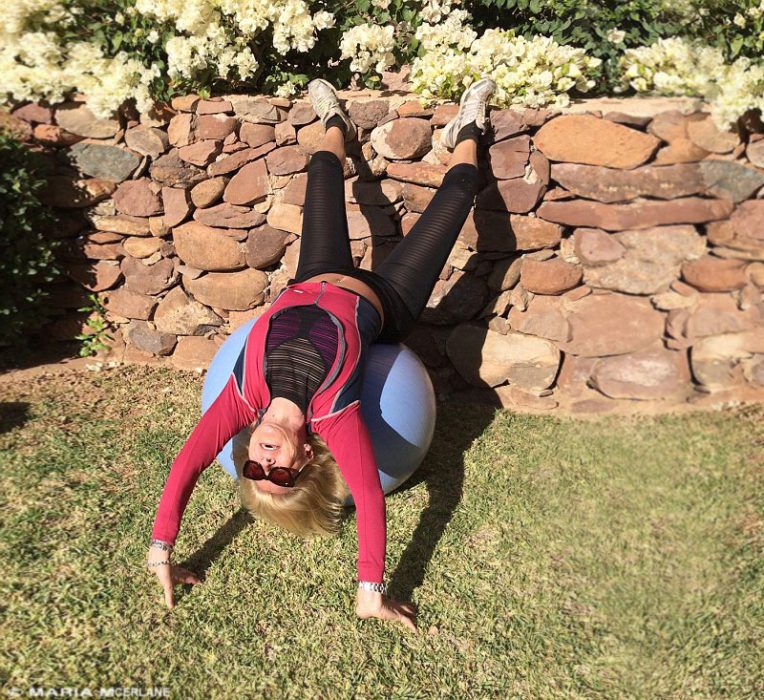 How actress Maria McErlane rediscovered her mojo by skipping Britain’s rainy boot camps to slim in the sun in Morocco. She chose an in:spa programme to help her get back to her ‘fighting weight’.

After six months off the demon gaspers and an overindulgent holiday season, I found myself 15lb heavier than my fighting weight. Horror.  For ladies of a certain age, this is no longer Rubenesque or plumptious but matronly. It’s one step away from elasticated slacks, a light perm and comfy slip-ons.  As I intend to march defiantly into my dotage, something needed to be done. Boot camps somehow seem too brutal.

The thought of rain-soaked yomps across Dartmoor at 5am, being screamed at by ex-soldiers and served gruel for breakfast would almost certainly end with me doing a stretch at Her Majesty’s pleasure.  Yet floating around in towelling robes sniffing lavender wasn’t going to kick-start a sluggish middle-aged metabolism or get me on the cover of Sports Illustrated. Then I found in:spa, which seemed like a compromise between the two.

Le Palais Paysan is a Brutalist-style boutique hotel set in the foothills of Morocco’s Atlas Mountains. Completed three years ago by the Belgian architect/designer Philippe Taburiaux and his partner Horst Redman, it appears stark by day yet magical at night.

Several times a year the hotel is taken over by the in:spa team of nutritionists, masseurs, fitness coaches, yoga teachers and amazing ‘clean food’ chefs.  There are only 16 rooms, along with a swimming pool, hammam, outdoor hot tub, riding stable, petting farm and olive groves.

I was advised to give up coffee a week before arrival to avoid the headaches and irritability associated with a caffeine detox.  There would also be no wheat, dairy, alcohol, salt or sugar on the menu. It’s a tough call, as you want to have a nice time, but the thought of no booze?  I had visions of evenings doing needlepoint by candlelight. How would we pass the time?

I was with my lovely friend Anna, who trained as a ballet dancer and is super-flexible. (Memo to self: far too pretty, fit and popular to take again.)

On arrival we were given our timetables for the week. Not since school have I felt quite so resentful. ‘Double Maths? Yeah, well you’ll find me smoking in the loos!’  Most mornings we woke to tiny tweeting birds hovering over the bougainvillea, or the distant bleating of baby goats making their way to the fields for grazing.  Before breakfast we had a sunrise jog/walk of 45 minutes (11,000 steps) before feasting on magic porridge, or nut muesli, or fruit or some form of egg concoction, all washed down with lashings of herbal tea.

Despite my determination to find it hateful, it was actually liberating to feel full.  Ninety minutes later came our training sessions. Gemma and Cath, our fitness gurus, were little pocket rockets bursting with power and energy.  Twice a day they would put us through our paces with all manner of routines set to tone, tighten, stretch and reawaken dormant muscles.  As these classes started before the sun was too hot, and later when it began to cool, being able to exercise outside was a major bonus, the beauty of the snow-capped mountains a necessary distraction.

Our group of 18 women ranged in age from 25 to 57, and included lawyers, beauticians, City traders, media types, mothers, and an American nurse who had just returned from an ebola hospital in Sierra Leone.  We also had one man who we threatened daily with oestrogen injections should he step out of line (only joking).

We had yoga sessions before lunch but for me it was a frustrating affair, knowing that my body was no longer capable of Olga Korbut-style bends and stretches.  I was forced to acknowledge that since I taught high-energy aerobics in the mid-1980s, 30 years had passed. Use it or lose it, they say, and whoever ‘they’ are, they are right.

But as the week progressed, I was able to feel my body coming back to life.  My chum Anna felt our yoga teacher Joanne King to be one of the best, thanks to her soft Irish brogue, lack of showboating, and an intuitive understanding of the mind/body/spirit trinity.  We fell a little bit in love with her.

Lunch was my favourite meal of the day – always a colourful array of salads, seeds, greens, protein (chicken or fish) and healthy carbs. The top-rated juice was broccoli and kiwi – trust me, it’s delicious.

I had a real sugar withdrawal three days in, with migraines, nausea, and a total inability to stay awake.  It meant a day was wasted in bed. I was really shocked by the power of the white stuff and vowed to give it up for good – though that is easier said than done.

When I was back on my feet, I went on one of the hikes, which meant an 8am start and a bus ride to the mountains.  The walk was about seven miles, which sounds like a breeze, but climbing and descending on slippery scree does require a modicum of caution.  The scenery was extraordinary as we passed through villages and olive groves, and braying donkeys loaded with produce being taken to market.  We would round a bend to see vistas of desert and shrubland stretching to the horizon.  I’m not quite sure what the locals made of these Lycra-clad amazons striding purposefully down hill and dusty dale.  I think I spotted a group of villagers laughing behind their hands, and who can blame them?

When the sun went down, a ‘restorative’ yoga class focused on relaxation and the need to still our busy minds.

Also included in our timetables were one-on-one fitness assessments, nutritional advice and life-enhancing massages which slightly blew our minds. It was a cross between sport, deep tissue and witchcraft.  Despite the hectic schedules, there was also time to hang out by the pool and relax in the sunshine.

Often after supper, Anna and I would lie on the grass, listening to the silence and staring at the stars.  I’m almost embarrassed to say that most nights we were in bed by 9pm – otherwise known as ‘going out time’ at home.

The day before we left, a few of us decided to forgo another hike, opting instead to take a 30 minute cab ride to the Medina in Marrakech.  Arriving at 8.30am meant we witnessed the square yawning into life as local traders prepared their wares.  Winding through the alleyways, we bought spices, rosewater, black kohl eyeliner, silver rings, rugs, sequinned baskets, eucalyptus crystals, vivid Yves Klein blue powder paint, embroidered slippers, woven throws and pottery urns.  We haggled for a while but found it time-consuming. Our pleas for ‘best price, first price’ seemed to make little difference.  The general rule seemed to be to halve the original asking price then begin the climb back up.  It’s more of a sport than an argument, so keep it light and keep smiling.

By noon we had reached peak shop. Clutching our purchases it was a struggle back across the square through the sea of humanity – hawkers with birds of prey, traders with cages of tiny tortoises, terrapins, chameleons, and snake charmers.  Marrakech is so much more than the Medina but having eschewed all tempting pastries, we needed to get back to low-calorie safety.

As I had foolishly mentioned to staff my time teaching aerobics, I was tasked with taking a 15 minute warm-up for our final class.  Swimwear was hiked and belted, pants were put over leggings, and makeshift sweatbands placed jauntily on heads.

The in:spa girls had downloaded Soft Cell’s Tainted Love, Rick Astley’s Never Gonna Give You Up, and It’s Raining Men by The Weather Girls.

For 15 minutes it really was the 1980s again, with us singing at the top of our voices – all thoughts of hip replacements, calcified knees or stress incontinence lay in another land called the future.

I was sad to leave our hideaway but several weeks on and I am still off the sugar. I have lost 8lb and regained my mojo. Begone, elasticated leisurewear…